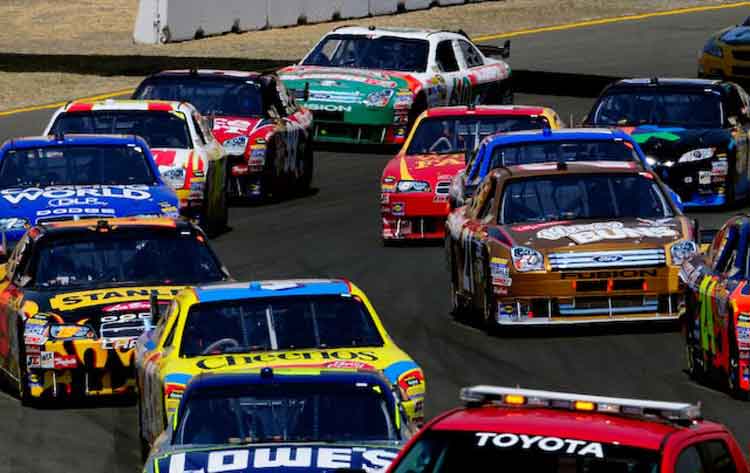 The era of NASCAR’s first generation race car began in 1948, the Strictly Stock era, and came to an end following the 1966 season. While this generation may be the most storied due to the fact it was the original, it certainly lacked in technology and safety.

Throughout NASCAR’s beginning phases, drivers and teams raced Oldsmobiles, Hudsons, and Plymouths that were fresh off the showroom floor. Of course, the savvy mechanics would tinker to find any competitive advantage.

NASCAR’s second generation racecar highlighted what many consider the sport’s golden years. From 1967 to 1980, drivers and teams sported the big block cars such as the Dodge Charger and Mercury Cougar. The cars you watched at the speedways on Sunday appeared the same as the cars you drive or see on the freeway, sans the numbers and decals. In fact, the framework on the racecars was identical to that of the cars sitting on the showroom floor at the dealership.

The cars were larger, and much safer than the first generation.

Legends such as Richard Petty, David Pearson, Bobby Allison, and Cale Yarborough thrived during this era.

Prior to the 1981 season, NASCAR decided to downsize the stock cars without straying too far from the cars you see on the road. The was due in large part to the fact that dealerships were selling the smaller compact cars as opposed to the big blocks vehicles that dominated the 1970’s. This era produced some memorable models, such as the boxy Buick Regals and Chevrolet Monte Carlos to the aerodynamically superior Ford Thunderbirds.

Dale Earnhardt, Darrell Waltrip, and Bill Elliott rose to prominence during NASCAR’s generation 3 era, which lasted until the end of the 1991 season.

Beginning in 1992, NASCAR teams no longer utilized a template that resembled the cars of that you and I would drive. While the sport truly began to flourish during this era, stock was, in essence, erased from the term stock car racing. Street stock cars such as the Chevrolet Monte Carlo was replaced by the four door family sedan Lumina (in 1989). Ford eventually replaced the Thunderbird with the Taurus. General Motors would phase out the use of Oldsmobile and Buick models during this era.

Earnhardt, Jeff Gordon, Tony Stewart, and Dale Jarrett were drivers that appeared to thrive with this car. While this era highlighted NASCAR’s rise to mainstream, unfortunately, this particular generation claimed the lives of some key names such as Adam Petty, Kenny Irwin Jr, and 7-time champion Earnhardt.

In 2007, NASCAR phased in the Car of Tomorrow. This generation of NASCAR machines featured a sizeable frame and cockpit, and was an utter success when it came to safety innovations. However, it was a complete eyesore, as it initially consisted of a front splitter and rear wing. While this model evolved over the past six years, it never resembled the type of car you would see at a dealership or on the highway. Therefore, it was enormously out of favor with the fans, find more info.

Jimmie Johnson rose to ascendancy during this era, winning all but two championships in six years.

In 2013, NASCAR will introduce its latest and hopefully greatest generation of stock cars. NASCAR’s aim was to combine the safety features of Generation 5 with the brand identity of the showroom cars that was prominent during NASCAR’s golden years during the Generation 2 era, and mesh it with some of the thrilling racing that fans fell in love with during the Generation 4 era.

Chevrolet will run the SS model, Toyota will continue with the Camry model, and Ford will feature the Fusion.